How Goran Stolevski found beauty in the suburbs

When filmmaker Goran Stolevski began writing Of an Age, his hometown in Melbourne's north-east took on a different light. 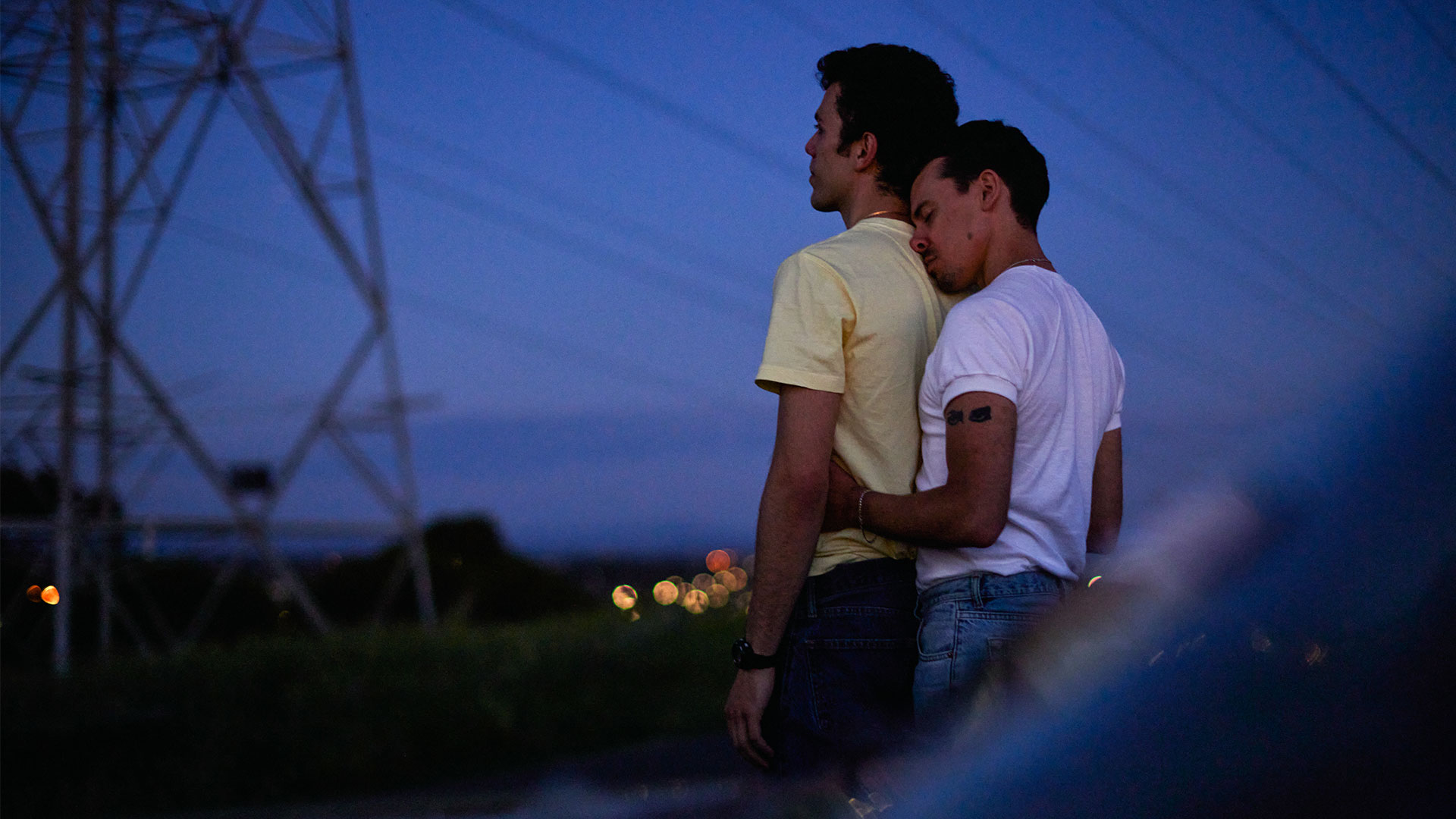 Elias Anton and Thom Green in Of An Age. Photography by Thuy Vy.

Named one of Variety’s Top-10 Directors to Watch in 2022, Goran Stolevski is making waves in cinema with two feature films screening at the 70th Melbourne International Film Festival (MIFF) this August. His sophomore feature Of An Age, launched the festival on Thursday evening, and charmed an audience of 2,000 industry folk and fans.

Of An Age charts the frenzied and intense romance of 17-year-old Serbian-Australian ballroom dancer, Nikola “Kol” (Elias Anton) and his dance partner’s brother, Adam (Thom Green). Set in 1999 suburban Melbourne—around Macleod, Watsonia, Bundoora and Reservoir where Stolevski spent his adolescence—Of An Age is a tender-hearted boy-meets-boy tale that delves into the complexities of life on the cusp of adulthood and the challenges experienced by immigrant families assimilating in Australia.

Charged with the kind of high-stakes emotion familiar to anyone who has ever been a teenager (especially a gay teenager with a group of conservative Serbian uncles on the periphery) these two men cross paths again a decade after their first meeting for an agonising reunion.

In his director’s statement, Stolevski said, “Scope doesn’t equal story-hopping across grand worlds and vistas. It means digging into a single compact human and excavating feelings the size of a universe.”

“From the moment I wrote the script, I went back to visit my parents and I walked around Macleod and it just felt different. I was so emotional for two hours I couldn't contain myself, which has never happened in my life. “

The challenge would be portraying this universe in the streets he’d once deemed mundane. “Is it actually possible?” Stolevski asked, to make cinema that’s transporting, woozily romantic; with lives unmoored and soaring at the K-Mart-adjacent no-through-way between Plenty Road and Bell Street, Preston? I know all of the streets in the story intimately, including the sizeable chunks that don’t look to have evolved past the Keating administration. I set myself the challenge: to dig into this unassuming patch of land and dig up seismic feelings.”

Migrating to Melbourne at age 12 from regional Macedonia, Stolevski was under the impression he was moving to the west. “I thought I was moving to Manhattan,” he remembers. Tetovo, the town he left with his Mum and Dad, although isolated in the top left corner of North Macedonia, was densely populated.

“I lived in a high-rise building with six people in a two-bedroom house. The main street was always swarming with people. Then I moved to Macleod where you could walk for four hours and not see a single human being. I was torn away from people I was very close to. So, I could only interpret Macleod through the life of things I treasured that weren't available to me anymore. I didn't really see it for what was in front of me.”

In many ways Of An Age became an opportunity for Stolevski to interrogate his teenage years in these banal suburbs and find meaning, even epic feeling, in the streets he’d found so challenging and empty. “I never write autobiographically, but for me, between age 12 and 18, I was so absent that I barely had memories. I thought, if I write a story that makes those places have soul in a way that I thought was lacking, maybe I'll recapture something…It's not the places that were the problem…the soul needs to come from me.”

Making Of An Age did change Stolevski’s understanding of his youth. “From the moment I wrote the script, I went back to visit my parents and I walked around Macleod and it just felt different. I was so emotional for two hours I couldn't contain myself, which has never happened in my life. 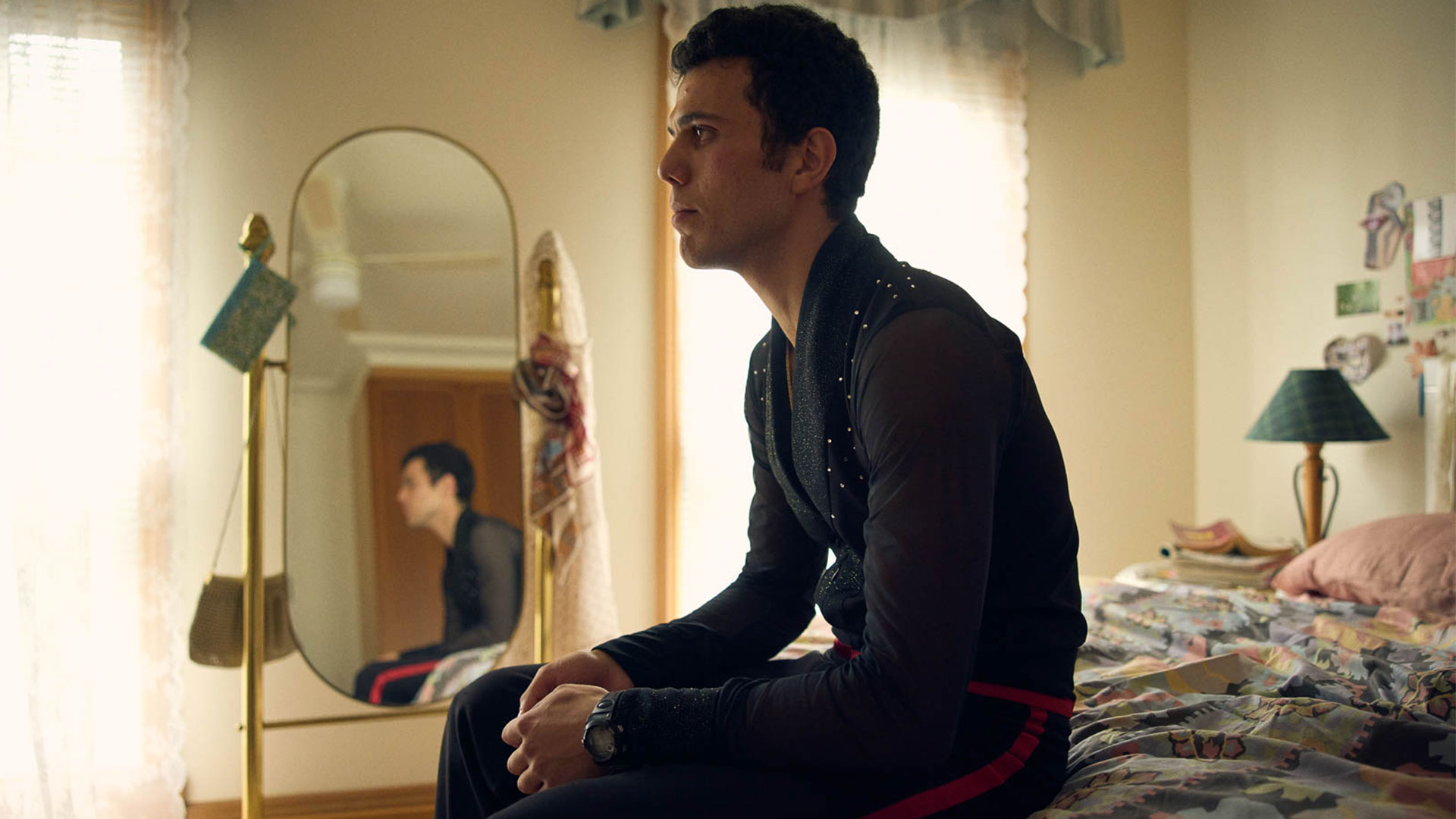 Elias Anton as Kol in Of An Age.

“I grew up convinced that for a story to be worth telling it needed an epic canvas... In writing this film I came to understand that my life growing up was, in fact, cinematic. That the people I grew up with, the places I got stuck in and the feelings I got stuck with were in fact big-screen-sized.”

A lot of Stolevski’s film is shot inside a moving car or looking outside the car’s windows. Powerlines are a constant feature throughout. “My house was under power lines,” he explains. “The power lines Kol runs past are the power lines I used to run past, so that was a meta moment.”

“When you grow up under power lines, they can dominate your life until you no longer notice them,” he continues. “Visually they're a great image, both in terms of being evocative of the story and creating a sense of place that ties everything together.”

Almost by accident, Stolevski’s film started revolving around power lines, perhaps a subconscious homage to the backdrop of his early life.

The film’s Location Manager, Elizabeth Sarsfield, said finding houses, streets, powerlines, and cars which resembled the end of the 20th century was both challenging and rewarding. “We were seeking out untouched areas of Melbourne to capture on camera for the first time. These suburbs are occupied by a lot of immigrant families where English is a second language." 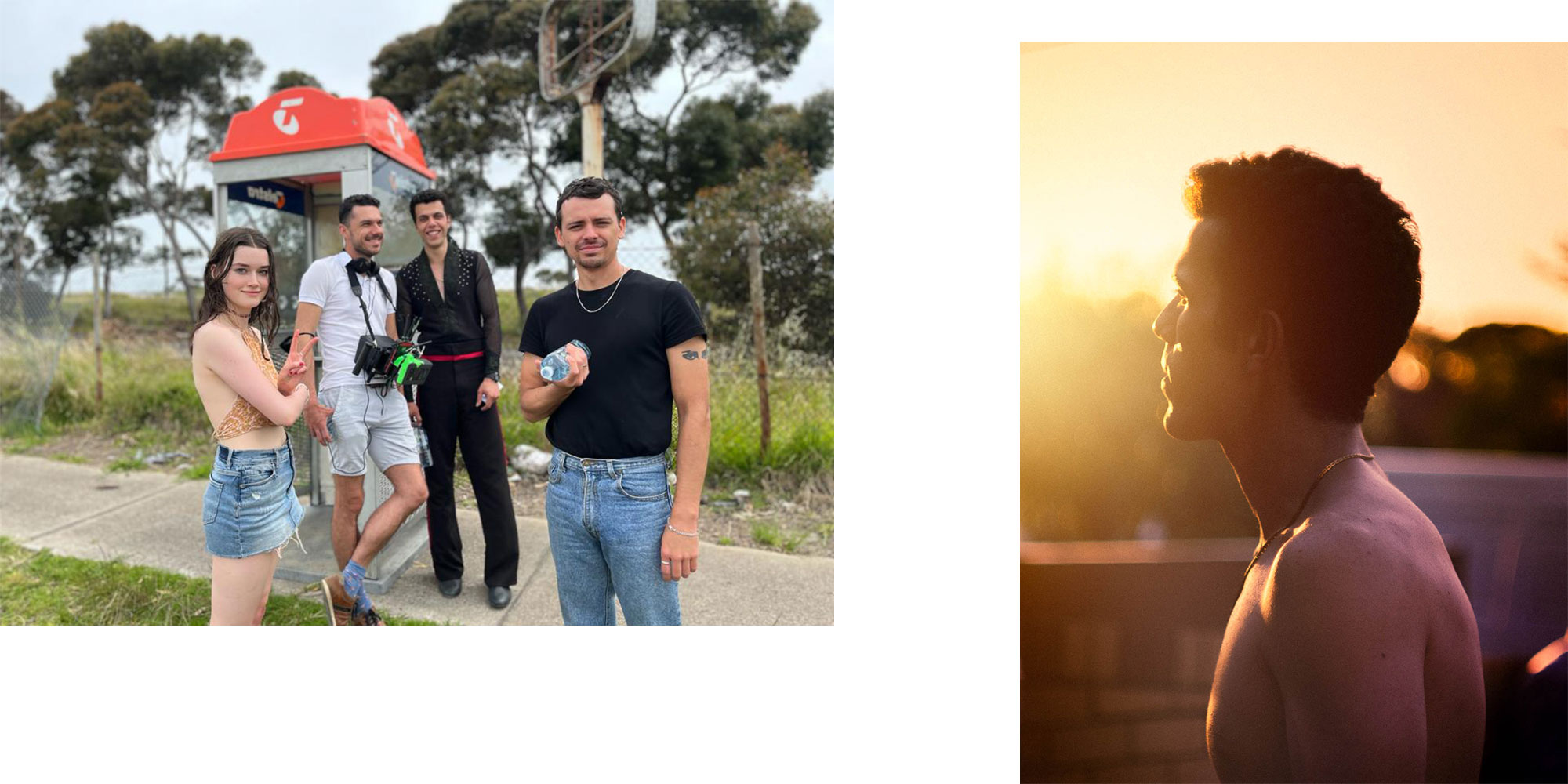 Compounded by the fact the team were shooting during the pandemic, it typically takes a large effort to build trust with a community before turning their neighbourhood and homes into a filmset. However, that is exactly what Stolevski and his crew managed to do.

The locations team, led by production designer, Bethany Ryan, relied on the goodwill and word-of-mouth of younger generations on social media who enquired with their older relatives who still lived in houses that resembled ‘90s time capsules.

“Shot in just 18 days, Goran’s intimate knowledge of these locations was evident from the very beginning,” Sarsfield said. However, that didn’t stop him being totally astonished by the logistics surrounding his own film when they started shooting. “I pulled into my parents' street and it was swarming with cars and this whole production unit. It’s usually a quiet, sleepy, empty street. I've never seen that many people on it."

"It was just the most surreal thing…I never would have pictured that to be the site of a film shooting…No one has. I even saw a neighbour I recognised who was just staring gobsmacked at this unit, because in that part of Macleod you don't see film vans pulling over. It kept happening in Macleod, and in Watsonia. It was genuinely beautiful.”

Early in the shooting schedule, Sarsfield was battling a typical headache when she realised it was ‘bin day’ on the street they were filming. Before temporarily moving half the houses’ bins to the other side of the road, she knocked on the door of a neighbour to alert them. Stolevski’s mother answered and proudly declared it was her son’s film they were making—after a decade of catering her son’s short films, she was pleased to see the production budget had extended to incorporate external catering. 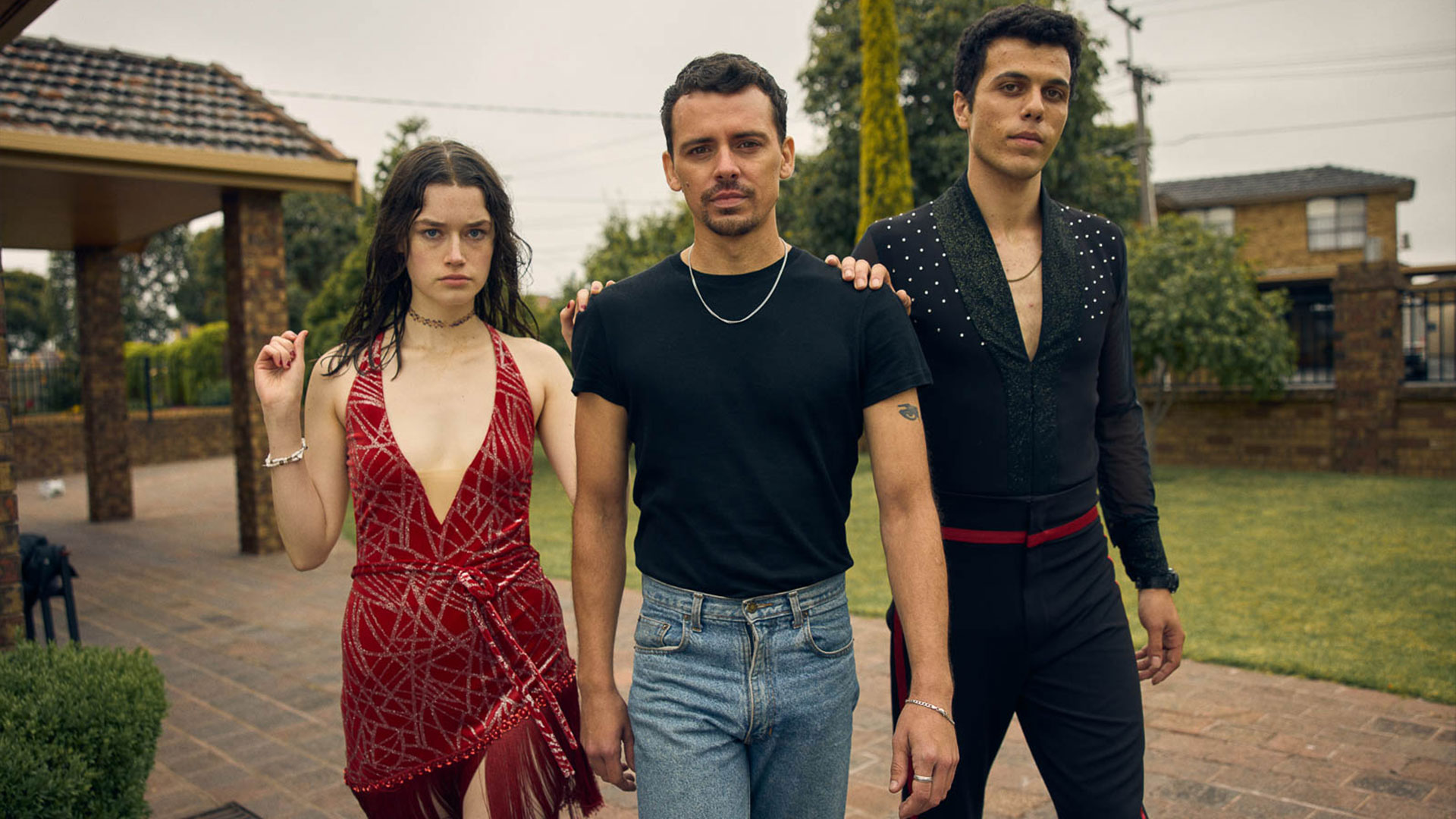 Hattie Hook, Thom Green and Elias Anton on the set of Of An Age.

Making a film in the streets you grew up in, about a period that is evocative of your own lived past can be extremely emotional, Stovlevski reflects. “There’s a nostalgia inherent in presenting any past—even one as recent as 1999—and a temptation to emphasise it, affectionately or otherwise.  [Production Designer] Bethany Ryan and I want to evoke the era, rather than punctuate it.”

“Beth and me spent weeks location scouting together. We would have spent longer, but COVID kept us apart. Bethany, Matthew Chuang the cinematographer, Kristina Ceyton our producer and me are usually in a car for weeks together looking at every single location…I see them as my quality control, because I can get carried away.”

MIFF’s decision to launch their 70th festival with the World Premiere of Of An Age came as a delightful surprise for the Macedonian-Australian filmmaker. "The push for diversity in cinema is more viable.... Now you can tell stories from perspectives that we haven’t seen."

“I grew up convinced that for a story to be worth telling it needed an epic canvas,” Stolevski said. “That for my life to have value I needed to be someone completely different in a place far away. In writing this film I came to understand that my life growing up was, in fact, cinematic. That the people I grew up with, the places I got stuck in and the feelings I got stuck with were in fact big-screen-sized.”

Of An Age is supported by VicScreen and is currently screening at MIFF. Find out more at miff.com.au and watch the trailer below.